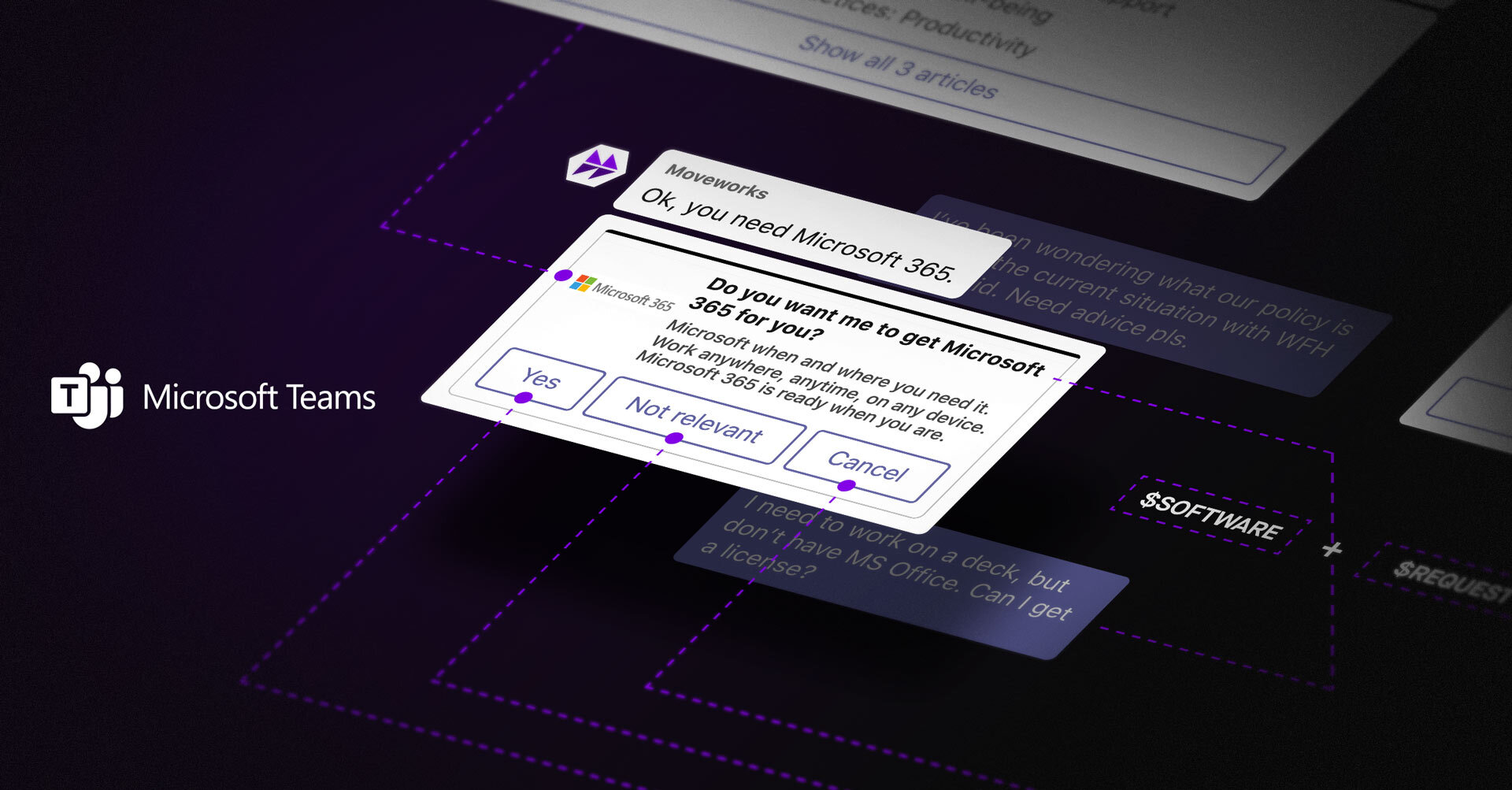 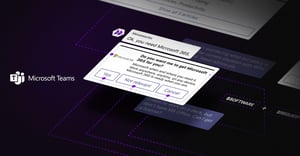 If you’re an IT leader, you know that most useful technology takes way too much of your time to build, deploy, and maintain. And unless you happen to have a team of world-class AI experts on hand, this do-it-yourself model makes truly game-changing technology seem out of reach.

At Moveworks, we’ve built a conversational AI chatbot that assists employees to instantly resolve their IT issues within Microsoft Teams—without forcing you to hire your own AI experts. We build, deploy, and maintain the hundreds of machine learning models that power our bot in-house, which means your help desk’s workload starts disappearing on day one.

Now, the Moveworks chatbot app is available for customers to install directly from either Microsoft AppSource or the Teams store. Going from implementation to impact with enterprise AI has never been easier.

“By helping to quickly resolve employees’ IT issues within Microsoft Teams, Moveworks allows companies to work faster. And in a world that now relies on technology to collaborate, it’s never been more critical to provide real-time, location-agnostic tech help.”

End-to-end IT resolutions on Teams 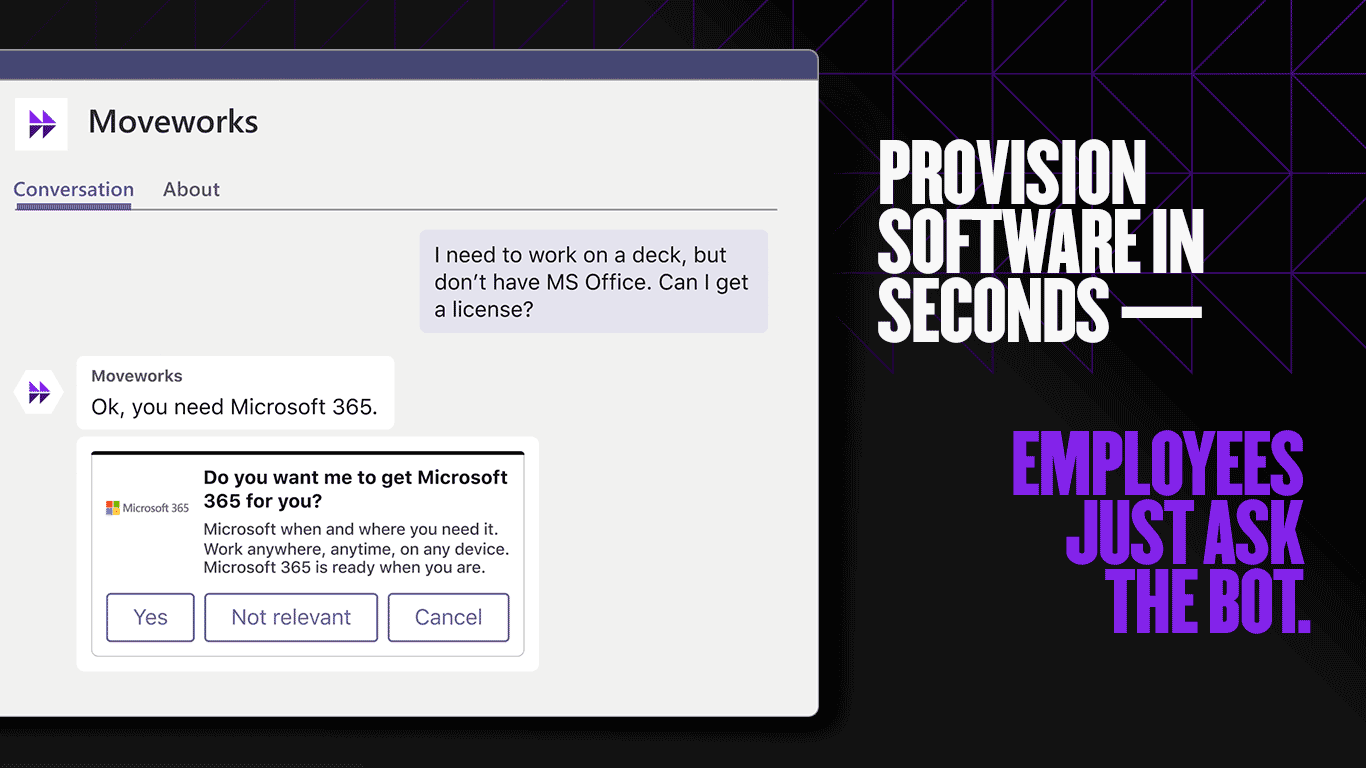 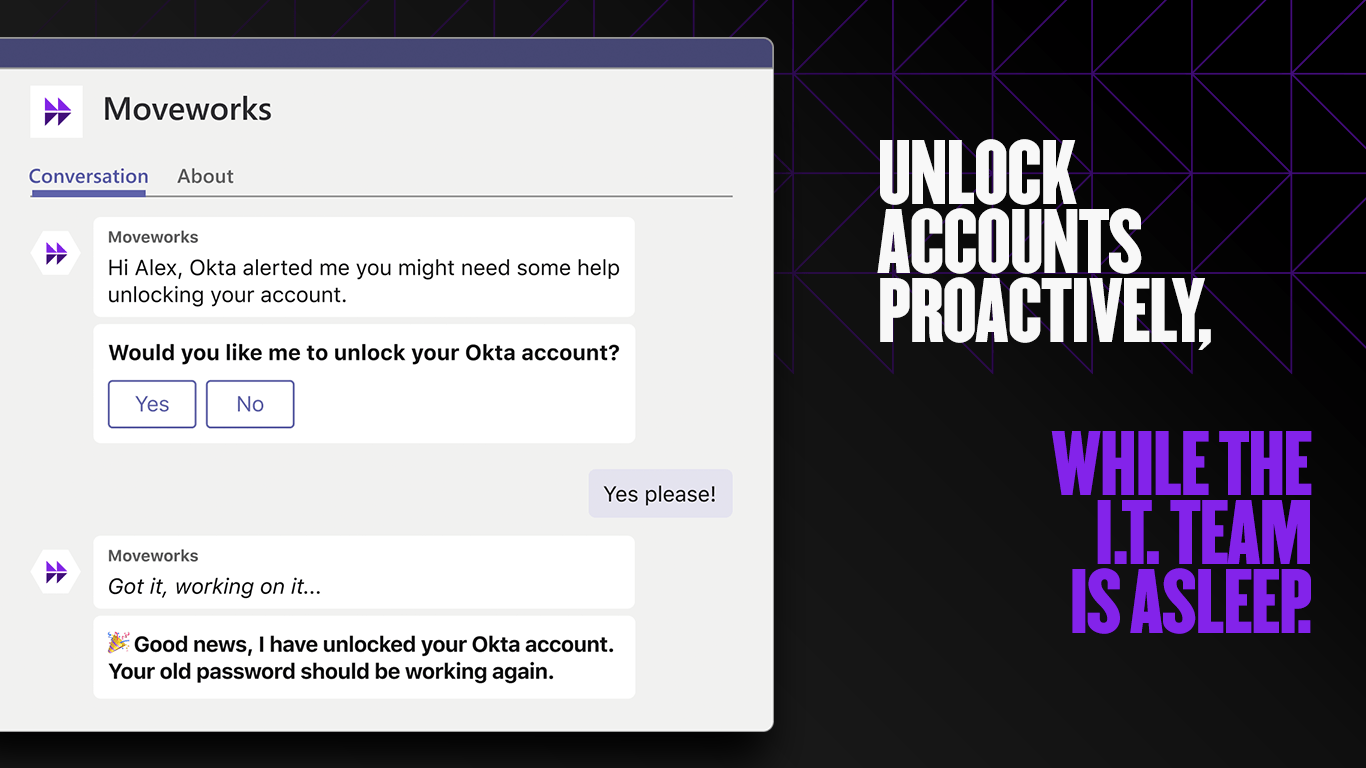 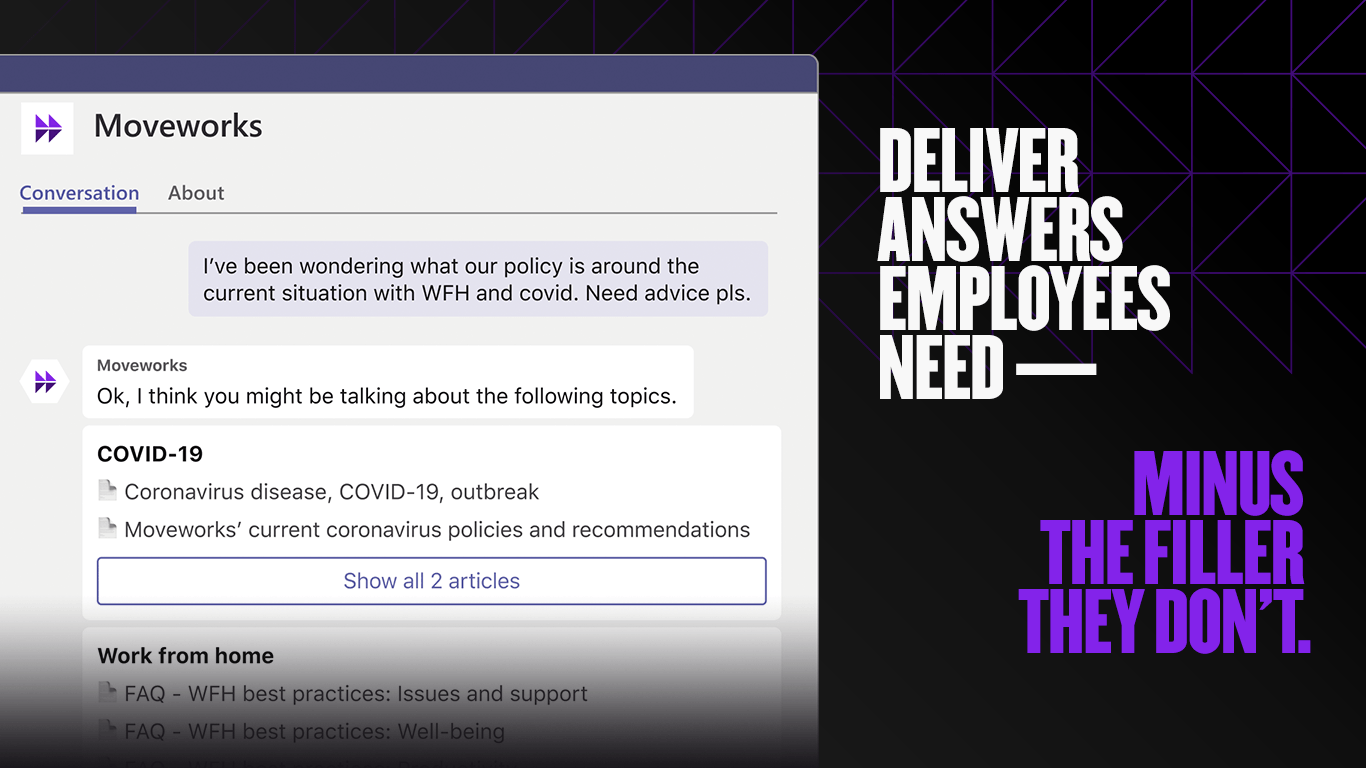 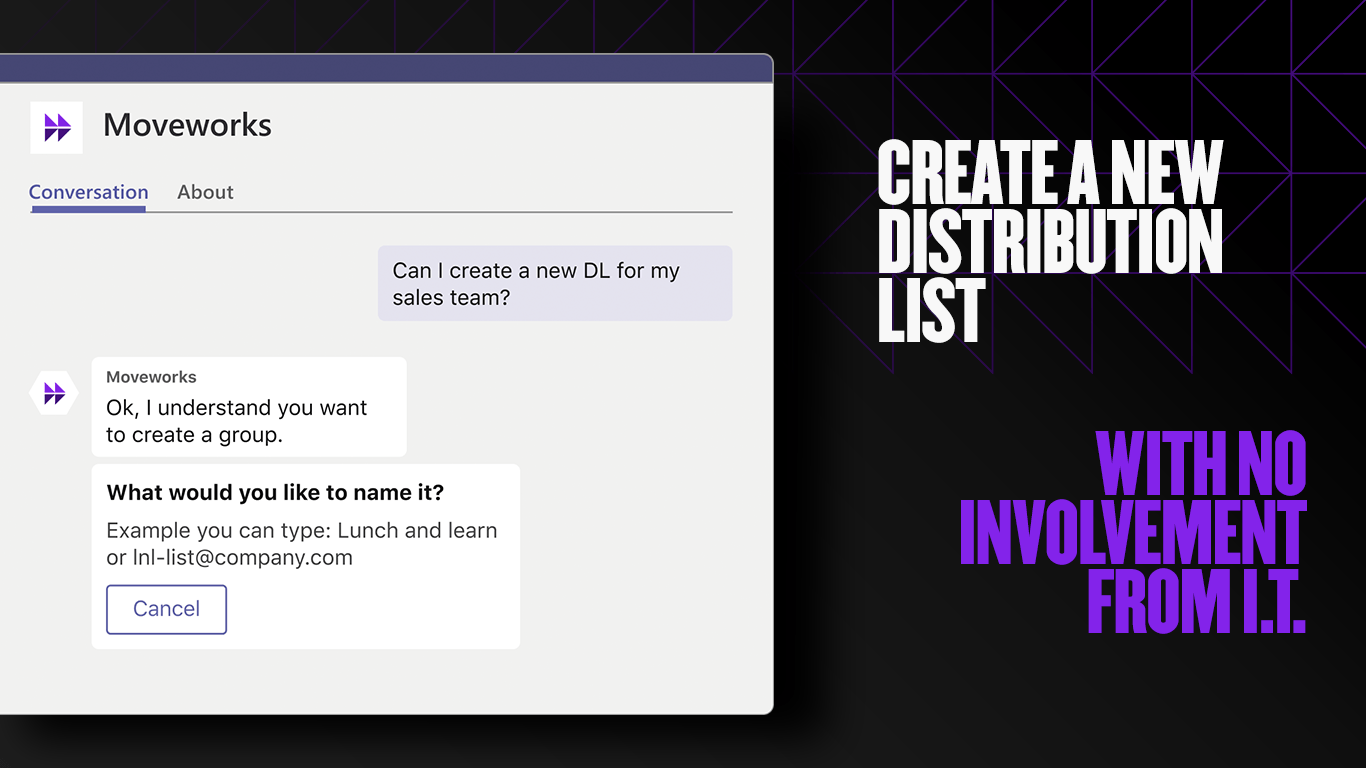 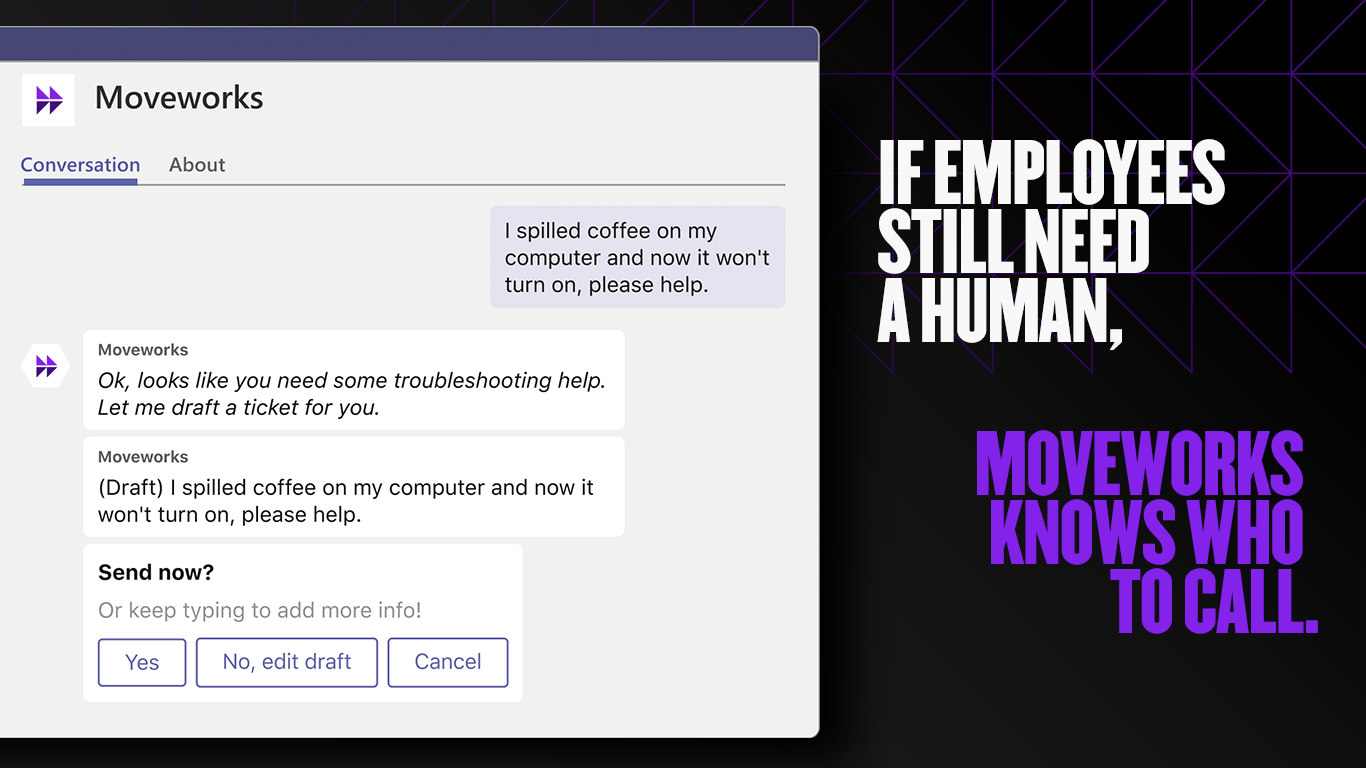 In the past, fully deploying our bot took eight weeks, but with the Moveworks chatbot app now available from Microsoft AppSource, you can shrink that time-to-value even further—thanks to these added capabilities:

For enterprise Teams customers like Equinix, Moveworks has significantly enhanced the Teams platform in two distinct ways. First, Moveworks allows Equinix employees already using Teams to fix their tech problems—from accessing software to editing email lists to unlocking accounts—via quick, painless conversations with our chatbot. And second, Moveworks intercepts IT issues submitted through other channels and then resolves those issues on Teams, bringing new users to the platform.

You can read Equinix’s success story here on Microsoft.com. 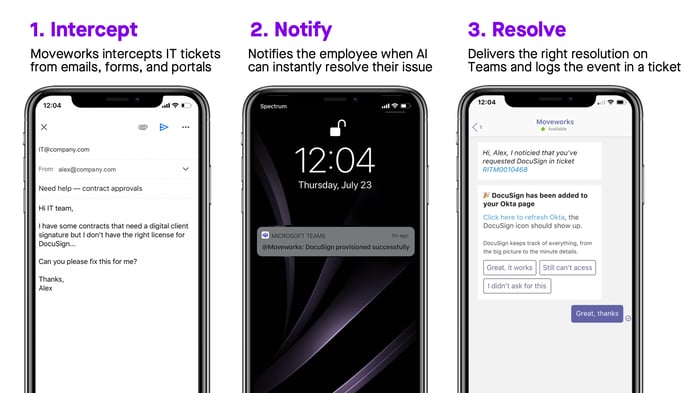 Particularly in this new normal of remote work, the ability to remain productive anywhere and anytime defines successful employees. But without a physical office or access to in-person help, these employees often don’t know where to find critical resources.

With Teams, however, every key team member, workflow, and file is consolidated in a single place. And by adding Moveworks to Teams, getting IT support is just as simple.

“Microsoft Teams is a powerful platform, and Moveworks makes it even more valuable. It’s a symbiotic relationship.”