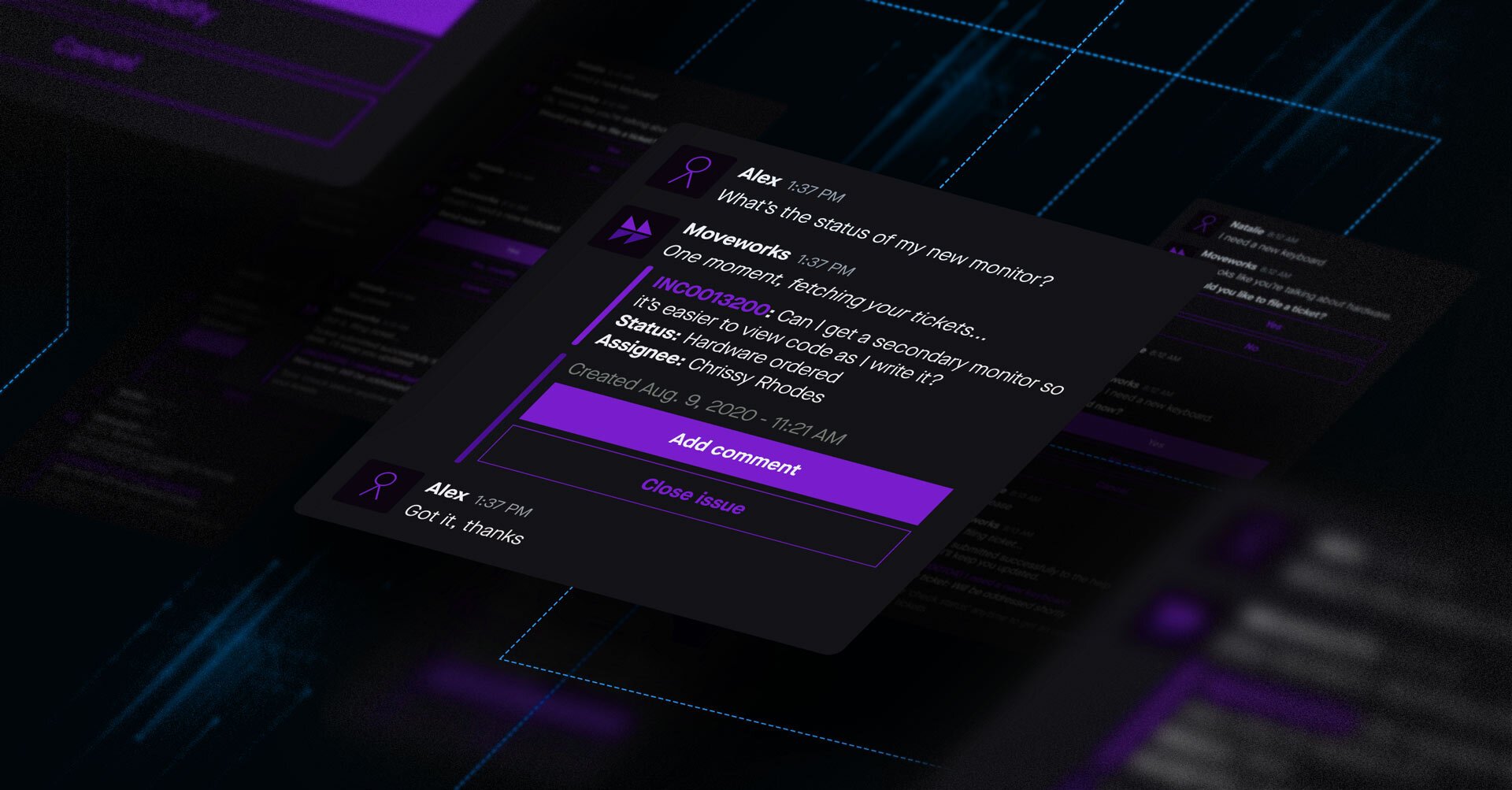 At Moveworks, we talk a lot about how slow IT support limits productivity and lowers the bottom line. Particularly with the majority of US employees now reliant on technology to get anything done during work-from-home, solving tech issues faster has become business-critical. When an application isn’t working or you can’t log into an account, you can no longer tap the shoulder of the IT professional sitting next to you. If you’re locked out, you’re locked out.

Regular readers of this blog know that AI can resolve many tech issues instantly, with no involvement from the help desk. About half of these issues are relatively routine — unlocking accounts, provisioning software, creating email lists — yet still take an average of three days to address using the traditional approach. Our primary focus is eliminating that delay from end to end: Employees describe their problems to our chatbot, and Moveworks solves them seconds later.

But what about complicated, high-touch requests, which require experts to resolve? These are the issues that often drag on for weeks, that take multiple interactions between employee and IT team, and that sometimes get lost in the shuffle for good. After analyzing millions of such complex requests, we identified three fundamental challenges:

With the above challenges in mind, we spent the last several years engineering, testing, and implementing a single solution. The result of that effort is Moveworks Concierge: an AI system that accelerates IT issue resolution, while also providing unprecedented visibility for both employees and service desks. In this post, we’ll explain our journey from idea to impact.

When tech issues take forever to fix, it’s usually because they involve lots of back-and-forth communication between IT teams and employees. At a time when other types of communication occur in seconds, exchanges with IT still span days. The primary culprit is the way IT teams engage with employees: email and siloed support portals. These channels live outside employees’ regular workflows and aren’t inherently interactive, so when high-touch issues require several conversations to complete, the whole process comes to a grinding halt:

While most IT issues require less than two comments to resolve, high-touch issues that need more comments significantly increase the mean time to resolution, or MTTR.

The fundamental obstacle here is that IT agents need to take action every single time an issue progresses, whether the employee is asking for a status update or the IT team needs business justification. The result? Help desk agents read through thousands of ticket comments each month — an endless queue that makes communication delays inevitable. 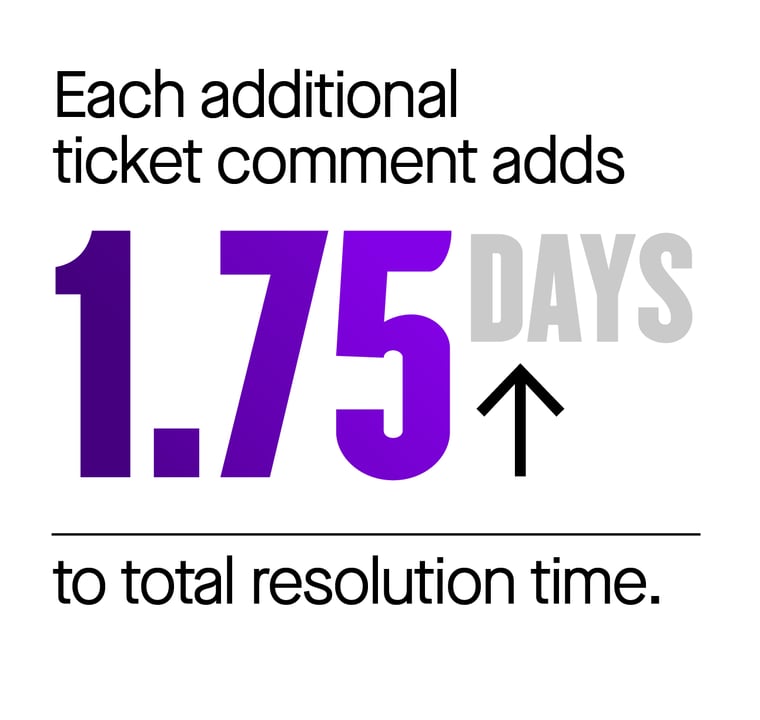 Reducing that delay from days down to just seconds is a task tailor-made for an AI system, provided it could:

We created Concierge to tackle these core challenges. With advanced natural language understanding (NLU), Concierge could converse directly with employees — without help desk agents needing to intervene. But in order to do so, we had to rethink such communication from the bottom up.

Thousands of IT conversations — in real time

How do you make communication instant and interactive? Step one is to acknowledge that email is broken, so simply moving the conversation to Slack or Microsoft Teams — where most of us now spend the workday — is a game-changer. Rapid collaboration on these messaging tools is the new normal, and we believe IT support should be no exception.

However, bombarding employees with constant Slack and Teams messages is not the answer, since such an approach becomes just as cluttered as email — and just as likely to be ignored. Employees respond immediately on the messaging tool because conversations there tend to be time-sensitive and important to their job. The key for Concierge, then, would be to meet that expectation with AI — surfacing only relevant information to cut through the noise.

If successful, we knew Concierge would speed up tech support every step of the way. Unlike emails, which can sit unread for days or even weeks, Concierge is designed to take advantage of the nature of Slack and Teams to conduct thousands of IT conversations in real time. From allowing employees to check the status of their issues, to nudging the help desk when those issues remain unresolved, Concierge would ensure that IT help happens as quickly as other enterprise workflows.

Concierge comprises numerous capabilities — three of which are especially responsible for accelerating resolution: 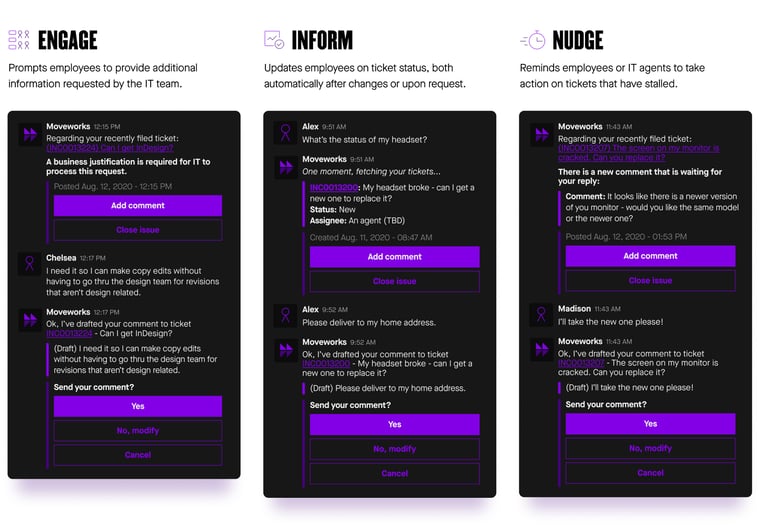 Concierge saves time and money for IT teams

That’s why Moveworks analyzed over one million IT tickets from across our customer base. What we discovered was an even more profound impact than we anticipated. When employees engaged with the Concierge capabilities above — Engage, Status, and Nudge — we found an average decrease in MTTR of 57.4%. In other words, Concierge cut the average resolution time for high-touch IT issues in half.

Faster resolution time for the average IT issue, by individual Moveworks Concierge capability.

Crucially, this acceleration does not disrupt backend workflows or force IT teams to adjust to a new process. Instead, Concierge handles employee-facing communication and uses AI to drive faster engagement, enabling those teams to concentrate on resolving issues. We built Concierge to do what AI does best — manage a mind-numbing amount of information — to complement the areas where IT specialists excel. 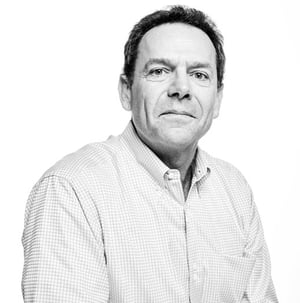 “One of the many things that I use Moveworks for, quite frequently, is inquiring on the status of my open tickets, and that’s something any employee can do instantly. The bot takes care of the communication for us — freeing up my team to work on bigger value-add work.”
Russ HarrisVP Operations, AppDynamics

For the large enterprises that have already implemented Concierge — Equinix, Autodesk, Broadcom, Nutanix, and Medallia, to name a few — such time savings translate directly to profits. With multimillion-dollar IT budgets to maximize, better efficiency means not only fewer delays for employees but also more resources to allocate on other projects.

In the era of remote work, productive employees are those who collaborate on tools like Slack and Microsoft Teams, in real time, wherever they’re located. Concierge brings this new normal to IT communications, allowing employees to add comments, receive updates, and request action on tech issues on the messaging tool. From a financial perspective, of course, IT organizations that don’t eliminate friction with AI are leaving money on the table. But beyond the bottom line, Concierge empowers IT teams to support employees at the speed of modern business.

Contact Moveworks to learn how AI can speed up your IT support.

Employee Experience Insights: Everything you need to know

AI Terms Glossary: Your guide to ChatGPT and all things conversational AI

AI Terms, from ChatGPT to generative AI to deep learning, here are the most important AI terms to know in 2023 and what they mean.

Reduce IT costs while also focusing on improving the end-user experience. Here are 10 reasons why AI needs to be part of your IT cost reduction strategy.

Generative AI: How to spot the real conversational AI companies and get past the hype

Understanding the difference between generative ai businesses is crucial when making investments in tech. Here's how to tell which are real and which are hype.

ChatGPT — Does it deserve its 15 minutes of fame? Yes, and why generative AI is the future.

ChatGPT is only the start of the future of generative AI. Moveworks CEO Bhavin Shah shares his take on ChatGPT and how the Human-AI partnership will progress.